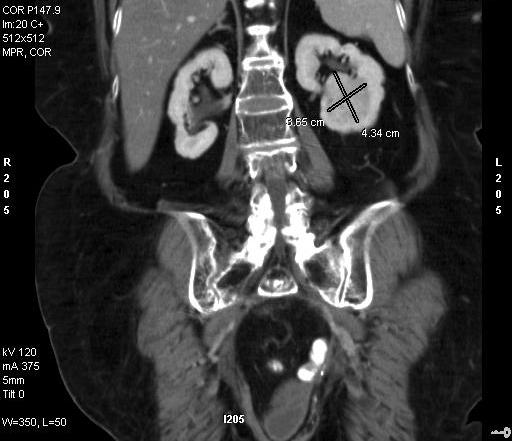 In adults, the most common type of kidney cancer is renal cell carcinoma. The incidence of kidney cancer has been increasing for reasons unknown. Kidney cancers are often detected incidentally during procedures such as CT scans shown to the left, which appear in the form of a solid renal mass or tumor. In the early stages of kidney cancer it is common to be without any symptoms. In later stages, kidney cancer symptoms may include blood in your urine, back pain, weight loss, fatigue, and intermittent fever. If a renal mass is found that is felt to be cancerous, we often will not biopsy that mass as surgery is usually the first line of treatment. Kidney biopsy carries the risk of a false-negative, so biopsy is ordered in rare cases that are felt to be non-cancerous or in patients with a variety of health issues where surgery is too risky. Surgical treatment options include radical nephrectomy (removal of the kidney), partial nephrectomy (removal of a portion of the kidney) cryoablation (freezing of the cancer cells), and radiogrequency ablation (heating of cancer cells). The location of the kidneys deep in the human body keeps them protected by the ribs and overlying other organs and body wall. As such, traditional open radical nephrectomy requires a large incision resulting in muscle splitting and removal of ribs to access the potentially cancerous kidney. This results in a prolonged recovery course, possible respiratory complications, and incisional hernias. The most favored open approach is the lateral approach requiring a large incision about 12 inches long usually between the 11th and 12th ribs. Often removal of one or both ribs is necessary to gain access. The incision must be large enough to allow the surgeon to maneuver around the blood vessels to gain control of them. The lateral approach often requires a partial detachment of part of the diaphragm to reach and control the upper portion of the kidney. Consequently, a weakened diaphragm makes it difficult for patients to fight off pneumonias in the post-op period. The laparoscopic approach may minimize or eliminate some of these risk factors.

Laparoscopic Radical Nephrectomy involves removal of the kidney along with the fat around the kidney, as is done in an open radical nephrectomy using a different technique.

In a laparoscopic nephrectomy usually two or three tiny puncture sites and a 2.5 inch incision for final kidney specimen removal are made. The spaces in the body are gently filled with gas to make working space and a small camera is placed into the body through one of the incisions. The other small incisions are used to place working instruments which can be used to perform the procedure. The entire kidney with the cancer within and with the surrounding fat and the layer known as Gerota’s fascia are removed. Once the entire specimen has been separated from the surrounding tissues, it is placed in a bag while still inside the body. The bag is then removed by making an incision.

Not all patients are candidates for the laparoscopic approach. Patients who have a history of multiple previous abdominal or kidney surgeries, obese patients, or those with advanced tumors that are too large or threaten vascular invasion are preferred open candidates. Kidney masses that are centered near the blood vessels should also be removed using the open technique.

As with any type of nephrectomy, the removed kidney will be sent to pathology for analysis and diagnosis of the type of kidney cancer that has been treated. The kidney cancer is also staged, which determines how extensive the local spread of the disease has been, and will indicate if future adjuvant treatment is necessary.

Typically, an MRI or CT scan is scheduled for six months after the procedure has been performed. Depending on the final pathology report which establishes the type of cancer which was removed, a future follow-up regimen is then established.